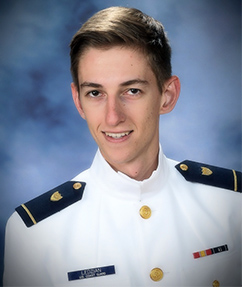 First Class Cadet Patrick Ledzian, the Electrical Engineering major, of United States Coast Guard Academy has received a 2017-2018 Fulbright U.S. Student Program grant to pursue a two-year Master of Science degree in Systems and Control at the Technical University of Delft (TU Delft) in Delft, Netherlands. Patrick Ledzian is also as a recipient of a Justus en Louise van Effen Excellence Scholarship 2017-2019 from Delft University of Technology, Delft Netherlands which complements his Fulbright scholarship. Patrick Ledzian is the first graduate of the USCGA obtaining two scholarships to pursue the same program.

The Fulbright Program is the flagship international educational exchange program sponsored by the U.S. government and is designed to build relations between the people of the United States and the people of other countries that are needed to solve global challenges. The Fulbright Program is funded through an annual appropriation made by the U.S. Congress to the U.S. Department of State. Participating governments and host institutions, corporations, and foundations around the world also provide direct and indirect support to the Program, which operates in over 160 countries worldwide.

Ledzian’s Fulbright research project will focus on building an artificial intelligence technology that can operate safely, efficiently, and reliably in an unpredictable environment. He will be developing a fault-tolerant and predictive flight control system that will be able to detect objects that unexpectedly obstruct or destruct its operation, to respond quickly to prevent damage or destruction, and to reprogram its operation in order to complete a designated task. The research methodology will include the design of individual sensors, the integration of sensors in an intelligent network, and at the end optimizing and testing the control system in real world applications. The project will be conducted collaboratively with the scholars from the Robotics Institute at TU Delft.

1/c Ledzian stated “…Exchanging ideas produces new technologies that provide better and safer lives. The use of artificial intelligence has already been applied in many industries. One example is in the medical field where robotic systems are assisting with surgical operations and patient diagnosis. Collaboration research on the development of intelligent systems among the government, industry, and universities in Netherlands is a key to economic growth, prosperity, and safety not only in Europe but also worldwide. Studying at TU Delft will promote the synthesis of ideas and enable me to establish relationships that I can maintain throughout my engineering career. …”

Upon his retirement from the USCG, Ledzian plans to join the Space Technology Mission Directorate at NASA to work as a robotics engineer. Ledzian believes that “…As it is critical to improve and increase the quality and safety of human life, my desire is to develop technologies that assist humans in tasks that are dangerous, repetitive, and require precision, in both predictable and unpredictable environments. My Fulbright education and experience in the USCG will allow me to enhance partnerships between the Department of Homeland Security, numerous research groups in Netherlands, and NASA. …”

As a Fulbright Scholar at the Technical University at Delft, he hopes to engage with the community by teaching chess and competing with international players, and to attend the World Chess Candidates Tournament, the qualifier for the World Championship. Playing chess has been an important part of his life and he was fortunate to play against several grandmasters, including Hikaru Nakamura, Anatoly Karpov, and Maurice Ashley after becoming a national chess champion. While in Netherlands, he also plans to visit the Rijksmuseum to study Rembrandt and Vermeer as well as to join the Slopend Survival Club to help organize and participate in backpacking trips. As he enjoys classical music, he would attend concerts by the Netherlands Philharmonic Orchestra at the Concertgebouw in Amsterdam.