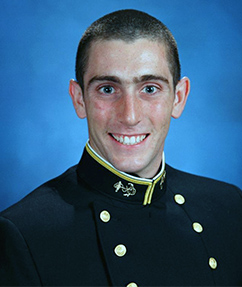 Joe DiRenzo IV, of Suffolk Virginia, who received his Ensign’s commission on May 19 with the Class of 2010, has been granted the Fulbright Scholarship. The Icelandic Fulbright Commission offered him a Fulbright U.S. Student Grant to pursue his Master’s degree in Renewable Energy Science (RES). In February 2011, he will arrive in Iceland after serving aboard USCGC Vigilant homeported in Cape Canaveral, Florida. After completing his studies in Iceland, Joe hopes to serve in U.S. Coast Guard engineering positions as a junior and mid-grade officer. He will be prepared to contribute to ship redesign to integrate renewable energy systems, or conduct research on renewable energy at the USCG Research and Development Center or the U.S. Coast Guard Academy. His study of fuel cell systems and hydrogen technology in the maritime environment will enhance the Coast Guard’s expertise in these areas.

Although ENS DiRenzo will be living in Iceland, his coursework will be conducted in English at The School for Renewable Energy Science (RES), which brings together researchers from academia, governments, and business, to share their expertise in renewable energy. The RES works in cooperation with two universities in Iceland, and with other leading technological universities around the world.

Iceland has recently made headlines because of the disruptions caused by the ash clouds produced by the volcanic eruption at Eyjafjallajokull; Iceland is one of the most geologically active sites on Earth, and thus it is not surprising that it leads the world in the utilization of geothermal energy. What better place to study indigenous renewable energy sources than Iceland, where over 70% of primary energy needs are met by these sources?

In addition to geothermal power, Iceland has integrated other modern forms of renewable energy into daily living. It is the forerunner in modernizing the use of energy through programs like electric cars, buses, and ships powered by hydrogen. In addition, Iceland, like the United States, is a maritime nation and has developed renewable energy science for application in the maritime environment. While undertaking research on integrating hydrogen fuel cells into U.S. Coast Guard vessels, Joe will have the chance to observe how hydrogen fuel cells are being phased into the Icelandic fishing fleet.

Joe’s interest in renewable energy was sharpened during his first-class summer assignment aboard USCG Cutter Cypress, homeported in Mobile, Alabama, where he saw how badly the U.S. Coast Guard needs to modernize its use of energy. When the ship changed throttle, it would burp a huge plume of black smoke in the air. Looking ashore, the coastline was a twisted maze of oil rigs and petroleum processing plants. Joe wondered how deep these rigs could drill before the oil fields in the Gulf of Mexico would completely dry up. The Gulf of Mexico looked more like an industrial site than a fragile marine ecosystem. It was then that he truly understood that developing renewable energy sources must become a top priority for the U.S. Coast Guard and the nation.

Here too, less than a year later, Joe’s worries have proved well-founded, as the explosion of the Deepwater Horizon and resulting massive oil spill has focused the attention of the Coast Guard and the entire world on offshore drilling in the Gulf.

Because of the Icelandic university’s calendar, Joe will begin his Master’s degree studies after spending six months of his Ensign tour as an Engineering Officer aboard the VIGILANT , Port Canaveral Fl. His dream is that his expertise in renewable energy and maritime operations will enable him later in his career to serve in, and even lead, Coast Guard maritime and environmental regulatory programs at Coast Guard Headquarters with the authorities to shape national policy on renewable energy in the maritime environment. His technical expertise and international study at RES will also position him to represent the Coast Guard in multilateral initiatives on renewable energy and environmental protection.

ENS DiRenzo is the 5th Academy graduate to win a Fulbright Scholarship in the past 5 years, the 7th overall. The Fulbright Program is sponsored by the Department of State, and administered by the Institute for International Exchange, providing for an exchange of citizens from over 140 countries. The U.S. Student Program endorsed Joe DiRenzo as an ideal candidate not only for graduate study abroad, but also to forward its goals of “facilitating cultural exchange on an individual basis” and “Promoting mutual understanding through engagement in the community.” Applicants are expected to show evidence of past involvement with humanitarian causes and an understanding of international problems.

ENS DiRenzo was deeply engaged in humanitarian work even before reporting to the Academy.

In his personal statement on the Fulbright application, Joe wrote: …”The smell of excrement and spoiled milk was the first thing that hit me. Hundreds of babies were crying as they suffered from malnutrition; their stomachs filled with fluid like balloons. After a week in Port au Prince, Haiti, I was dejected and ill. With shadows under my eyes from not sleeping well in the hot rectory, and a weak stomach from drinking poorly purified local water, my nerves were raw. I left the orphanage and wept, leaving my group because I was ashamed.”

While still in high school, Joe had visited Haiti as part of his EAGLE Scout project to raise money and acquire school supplies for the Maison Fortune Orphanage in Hinche, Haiti.

At the Academy, Joe continued to seek solutions for the seemingly insurmountable problems of Haiti, the poorest country in the Western Hemisphere even before the recent devastating earthquake, which fortunately did not damage the Maison Fortune Orphanage. Joe chose to major in mechanical engineering because of its potential to transform people’s lives through the creative application of science and technology. During his junior year at the Academy, Joe worked with his academic advisor, LCDR Clippinger of the Mechanical Engineering Section, Dept. of Engineering, to design a renewable energy system for Maison Fortune. The orphanage uses a costly, aging diesel powered generator to provide a few hours of electricity on an intermittent basis. Joe’s goal was to find a way to improve the quality of life of these children while also lifting a financial burden from the orphanage (the generator consumes expensive fuel and requires regular maintenance).

Joe’s independent study involved a thorough review of all the different available forms of alternative energy: wind, water, solar, and biomass. Working with another student, Joe researched micro-hydro applications and developed a numerical algorithm to compute the amount of energy that could be economically extracted from the river flowing next to the orphanage. They did the same for wind and solar, drawing on satellite meteorological data to estimate the wind conditions and average solar insulation in Hinche, Haiti. They then used these data to size and price competing alternative-energy systems. The biomass system was quickly determined to be un-sustainable in the environmentally ravaged country. Of the remaining options, the solar system was determined to be the most effective, and Joe developed a detailed design using an inverter/charger tied into a battery bank that was sized to provide the orphanage with its expected energy requirements twenty-four hours a day.

LCDR Clippinger stated that he has learned a lot from Joe, specifically about what is sometimes called “human engineering.” This type of engineering requires not only knowledge of technology, but also an understanding of the human condition. As he did his computations to predict the expected electrical requirements at the orphanage, Joe drew on not only the experience of the orphanage staff, but his personal experience as a volunteer at Maison Fortune, familiar with the demands of caring for over 100 children. The technology that Joe picked as being the best fit for the orphanage was selected not only for its cost-effectiveness and environmental friendliness, but also for its ability to best meet the orphanage’s daily needs for bathing, eating, and education.

As a cadet, Joe DiRenzo was a gifted student, natural leader, and active in sports and extra-curricular activities. He was captain of the Academy’s rowing team in 2010 and won numerous medals in rigorous athletic competitions. He was active as a peer tutor and has participated in a wide variety of activities ranging from high school engineering awareness initiatives (the Academy’s AIM program) to drama and yoga.

In his personal statement of the Fulbright application, Joe wrote: …”The smell of excrement and spoiled milk was the first thing that hit me. Hundreds of babies were crying as they suffered from malnutrition; their stomachs filled with fluid like balloons. After a week in Port au Prince, Haiti, I was dejected and ill. With shadows under my eyes from not sleeping well in the hot rectory, and a weak stomach from drinking poorly purified local water, my nerves were raw. I left the orphanage and wept, leaving my group because I was ashamed.

When I went back to the United States, I noticed differences that only an experience like visiting the poorest country in the Western Hemisphere could provide. Materialistic and spoiled, my peers would browbeat their parents into buying the latest clothes and games, not even realizing that miles off the coast of the United States, children the same age barely had enough strength to lift their arms. At that point in my life, I committed myself to making life better for the orphans at Maison Fortune Orphanage.

I decided to attend the United States Coast Guard Academy which prepares future officers for humanitarian, law enforcement and environmental protection missions. At the Academy, I chose to major in mechanical engineering because of its potential to transform people’s lives through the creative application of science and technology. I pondered what an island nation with no means of generating their own fuel and little money to import fuel could do to improve their standard of living. Recalling the barren, treeless mountains stripped for cooking fuel, I also began learning about how engineering could help the environment through renewable energies.

During my junior year at the Academy, I used my mechanical engineering skills to undertake another project with the Maison Fortune Orphanage, designing a renewable energy system to reduce their dependence on a struggling generator. LCDR Clippinger, my project advisor, and I researched several low technology energy alternatives, and designed a solar panel based solution to the orphanage’s energy needs. I calculated that the system would cost close to $48,000, of which $10,000 has been raised to date. I am determined to finish this project, and immediately start more like it. Every time I work on this project, every time I sit down at my desk and calculate kilowatts produced, I am reminded of the poverty and environmental destruction that can result from the exploitation of nonrenewable energy sources, and how much money the orphanage will save on energy. I am reminded of that time years ago when the orphans smiled freely and the bubbles soared.”