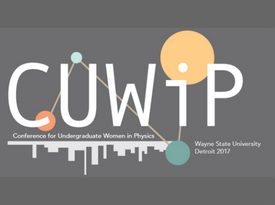 In January of 2017, First Class Abby Culp presented her research in astrophysics at the regional Conference for Undergraduate Women in Physics (CUWIP), sponsored by the American Physical Society. This conference brought hundreds of undergraduate women conducting research in physics and related STEM fields to Harvard University. This afforded students throughout the region the opportunity to network with peers, interact with professionals in science, and present on research efforts. 1/c Culp culminated a semester of observational astronomy with a poster presentation at the conference, entitled “Observation and ColorMagnitude Analysis of NGC 7789”.

Stellar clusters are groups of gravitationally bound stars that share a plethora of similar characteristics (i.e., metallicity, age, evolutionary traits) 1 . The number of member stars determines cluster classification as either globular (large) or galactic/non-globular (small)2 . NGC 7789 (23h54m28s, +56o 26.2’) (Fig. 1) is a cluster that is intriguing to astronomers due to the presence of a “clump” of red giant stars on color-magnitude diagrams2,3 (CMDs). It is theorized that this “clump” may help astronomers understand the similarities between this cluster and other ones with similar patterns3 . 1/c Culp, under the guidance of LT Toomey and Dr. Harris, constructed CMDs using Interactive Data Language (IDL) programming, striving to accurately replicate previous results with data collected from the U.S. Coast Guard Academy’s Observatory in Stonington, Connecticut.

Data were collected from the U.S. Coast Guard Academy Observatory on November 7th , 2016, under fair viewing conditions, with a 20-inch reflecting telescope. Blue, Visible, and Red filters were exposed for 10 minutes each for a total of 30 minutes of exposure time. These data was collected and initially processed in the Smithsonian DS9 software. Images were calibrated with five standard stars (NGC 7789 353, 605, 696, 732, 746) to determine full width half max (FWHM) values and zero point magnitudes. With this information, IDL programming was used to match point sources (stars) in each color data set, and CMDs were produced by relating the three filters. With the development of B-V filter color magnitude data and relating it to the V filter color magnitude data, researchers could see the presence of the aforementioned red giant “clump” in the diagrams. Furthermore, the CMDs produced by 1/c Culp, the cluster’s main sequence followed the trend displayed by previous research.

All of the diagrams appeared similar to previously created diagrams, which supported the accuracy of the researchers’ calculations and data collection. This is of significant importance to the Coast Guard Academy’s mission to enhance and utilize its observatory even without formal astronomy programs. The evident accuracy of the results is useful in verifying that the observatory equipment is functional and a viable resource for future research. With these data, it would be possible to construct a full Hertzsprung-Russell diagram for NGC 7789. Continued observations of NGC 7789 will further validate the effectiveness of the observatory as a research tool for cadets at the Academy. Future astronomy initiatives of the Physics Section will generate guidance for cadets interested in learning about IDL programming and its applications in astronomy, as well as observatory and equipment procedures when undertaking advanced research projects.