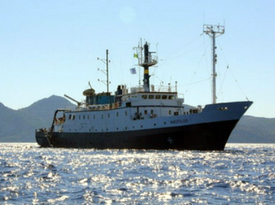 Dr. Deanna Bergondo, Associate Professor of Marine Science and 1/c Nolan Salyer, Marine Environmental Science major, have been selected by the Ocean Exploration Trust (OET) to participate at sea during their 2014 Nautilus Exploration Program. They will join the Nautilus Corps of Exploration during ocean expeditions from June through October in the Gulf of Mexico, Caribbean Sea, and Atlantic Ocean.

Dr. Bergondo will be a Navigator aboard the Exploration Vessel (E/V) Nautilus on the first leg of the 2014 expedition, 11-16 June. The expedition will involve exploratory, high-resolution mapping of the regions of the Great Bahama Bank and the Straits of Florida. These steep, carbonate structures are potential areas for mass wasting and tsunamigenesis.

1/c Salyer will be a Navigator aboard E/V Nautilus from 16 June to 26 July. During his expedition, he will be fully immersed with the science team onboard the Nautilus. He will be part of the ECOGIG (Ecosystem Impacts of Oil & Gas Inputs to the Gulf), the GISR (Gulf Integrated Spill Response Consortium) and the Exploration of the Gulf of Mexico expeditions. He will gain experience in communications and leadership, including participation in educational and outreach activities that are the keystone of the Nautilus Exploration Program. In addition, 1/c Salyer has signed up for a directed studies project under the guidance of Dr. Bergondo to analyze data collected while underway when he returns to the Academy in the fall.

1/ c Nolan Salyer states, “I am looking forward to applying my unique MES and Navigation background to completing the mission of the Nautilus and furthering the strong relationship between the scientific community and Coast Guard.”

The E/V Nautilus will embark on several expeditions off the coast of the United States, Belize, Honduras, Jamaica, and Grenada during the 2014 expedition season. The Corps of Exploration will conduct live interactions with shore-based audiences via Nautilus Live, a 24-hour web portal bringing expeditions from the field to future explorers on shore via telepresence technology at www.nautiluslive.org and via social media.

“One of the major goals of our Nautilus Exploration Program is to inspire the next generation of explorers in STEM fields,” said Expedition Leader and OET Executive Vice President, Dr. Katherine Croff Bell, “so we’re very excited to provide educators and students with the direct experience of pure exploration, while allowing them the opportunity to share their experience far and wide with their peers.”

Participation in the 2014 Nautilus Exploration program is part of a developing partnership between the Coast Guard and the Ocean Exploration Trust. Dr. Bergondo states, “The partnership will provide an excellent internship opportunity for our cadets in Marine Environmental Science, Engineering and possibly Humanities. E/V Nautilus will provide our students with hands on experience using remotely operated vehicles (ROVs) and high-resolution side scan sonar to explore unknown areas and features of the oceans. The future establishment of an Exploration Command Center (ECC) at the Academy will provide our students and visitors a way to interact directly with the scientists onboard E/V Nautilus as operations onboard are streamed live 24/7 via the Internet while Nautilus is at sea. This will be a powerful teaching tool not just for marine science courses, but for Academy Introduction Mission (AIM) students, the CGA Scholars Program, and other Academy visitors.”

Follow Dr. Bergondo and 1/c Salyer live at www.nautiluslive.org while onboard E/V Nautilus exploring the Straits of Florida and the Gulf of Mexico this June and July and tune in anytime from June 11 through October 9 as the Corps of Exploration stream their exploration and discoveries live. Also follow the adventures on social media at Nautilus Live on Facebook and @EVNautilus on Twitter.

About the Nautilus Exploration Program

The Nautilus Exploration Program was founded in 2008 by Dr. Robert Ballard. Our international exploration program centers on scientific exploration of the seafloor launched from aboard the Exploration Vessel Nautilus, a 64-meter research vessel currently based in the Caribbean Sea and additional research vessels. In addition to conducting pure scientific research, the Nautilus Exploration Program offers live video, audio and data feeds from the ship to explorers on shore via telepresence. The Program also includes an education component that brings educators and students on ocean expeditions. The 2014 Nautilus Exploration Program sponsors are the National Oceanic and Atmospheric Administration, Bechtel, Sea Research Foundation, Office of Naval Research, the Viola and Panthers Foundations, Alcoa, National Geographic Society, University of Rhode Island, and additional private donors.