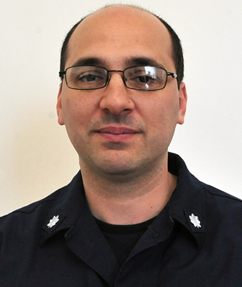 CDR Benin graduated in 2001 with a B.S.E.E. with High Honors from the Coast Guard Academy, having served as the Regimental Honor Officer and Chairman of the Cadet Standards of Conduct Board. He then served as the Electrical and Electronics Officer aboard the USCGC Healy (WAGB-20) while completing his Engineer-Officer-In-Training (EOIT) qualifications. In 2003, he began graduate studies at the Georgia Institute of Technology, was selected as an adjunct MacArthur Fellow, and ultimately earned a Master of Science degree in Electrical and Computer Engineering and a Master of Science degree in Information Security. In 2005, he was selected as a member of the Permanent Commissioned Teaching Staff (PCTS). He successfully defended his dissertation and graduated with a Ph.D. in Electrical and Computer Engineering in 2012 and presently focuses on the areas of computer networks, programming, and security. Dr. Benin has previously served as the Director of Academic Advising and presently is the chair of the USCGA Cyber Council and Cyber Systems Program Coordinator.