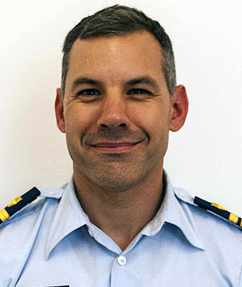 LCDR Ben Wroblewski graduated in 2002 from the U.S. Merchant Marine Academy with a B.S. in Marine Transportation. Upon reporting to the CGC Seneca (WMEC-906) in Boston, Massachusetts, he assumed the duties of Weapons Officer and Communications Information Center Officer. In 2004, LCDR Wroblewski reported to Pacific Area Headquarters in Alameda, California as a Maritime Security Watch Officer and a Search and Rescue Controller. In 2006, he reported CGC Dallas (WHEC-716) in Charleston, South Carolina as Operations Officer. He then served from 2008 to 2012 with the Atlantic Area Operations staff in Portsmouth, Virginia. In 2012, he was accepted to the USCG Financial Management Program and reported to the College of William & Mary, Mason School of Business where he earned degrees as a Master of Business Administration and Master of Accounting. LCDR Wroblewski recently finished a tour as Financial Section Chief of the Command, Control, Communications, Computers and Information Technology Service Center located in Alexandria, Virginia.