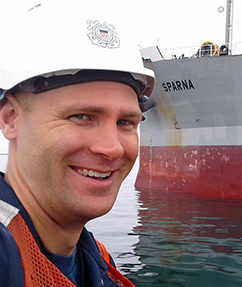 LCDR Dan Brahan joined the Coast Guard Academy staff in 2020. Previously, he served as the Chief of the Port State Control Branch at Sector Los Angeles – Long Beach from 2018 to 2020. In this role, he led a staff of 22 civilians, officers, and enlisted to complete over 900 safety and security exams of foreign vessels calling upon the ports of Los Angeles and Long Beach. Before fulfilling this role, he served as a vessel inspector at Sector LA – LB, inspecting U.S. small passenger vessels and foreign vessels from 2016 to 2018.

Prior to his assignment at Sector Los Angeles – Long Beach, LCDR Brahan served as a Staff Naval Architect at the Marine Safety Center from 2013-2016. In this assignment, he reviewed general arrangements, structures, stability, and structural fire protection plans and calculations for floating production platforms, offshore supply vessels, and barges. As a collateral duty, he served as a duty officer on the Salvage Engineering Response Team (SERT) working on over 50 salvage cases and deploying on three separate cases.