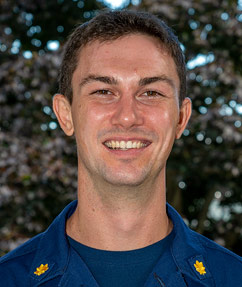 Lieutenant Commander Fellers graduated from the U.S. Coast Guard Academy in 2008 with a Bachelor of Science degree in Operations Research and Computer Analysis. His first assignment was as a Deck Watch Officer in USCGC VIGILANT (WMEC 619) where he made multiple law enforcement patrols throughout the Florida Straits, Windward Passage, and Caribbean basin. Then he was selected as Executive Officer for the commissioning crew of USCGC BERNARD C. WEBBER (WPC 1101), the service’s first Fast Response Cutter. In 2013 he transferred to District Seven Headquarters in Miami, FL, serving as cutter scheduler and program manager for counter-narcotic and migrant interdiction missions. In 2016 he took command of USCGC MONOMOY (WPB 1326) assigned to Coast Guard Patrol Forces Southwest Asia, forward deployed to the Arabian Gulf in support of Operations ENDURING FREEDOM and INHERENT RESOLVE. He followed this assignment serving as Commanding Officer, USCGC LIBERTY (WPB 1334) in Juneau, AK, where he conducted living marine resource and search and rescue operations throughout the vast, remote region of Southeastern Alaska. He then attended the University of Rhode Island and graduated in 2021 with a Master of Science in Systems Engineering before reporting as an Instructor in the USCGA’s Mathematics Department.