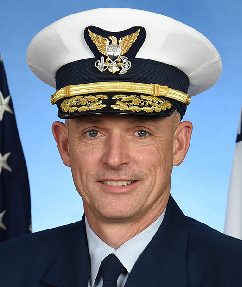 Rear Admiral William G. Kelly assumed the duties of the 42nd Superintendent of the U.S. Coast Guard Academy in New London, Connecticut, May 30, 2019. He reported to the Academy after serving as Assistant Commandant for Human Resources (CG-1) in Washington, DC.

As Superintendent, Rear Admiral Kelly oversees the Coast Guard Academy’s recruitment, accession, education, development and graduation of cadets with a Bachelor of Science degree, followed by their commissioning as officers in the United States Coast Guard. He leads faculty and staff who carry out a comprehensive 4-year program that combines academics, athletics, leadership and professional development.

Rear Admiral Kelly is a 1987 graduate of the Coast Guard Academy and he earned his Master’s Degree in Instructional Systems Design and a Certificate in Human Resource Management from Florida State University. He has extensive experience in training, education and the development of leaders of character; serving as the Commanding Officer, Coast Guard Recruit Training Center Cape May, the Director of the Coast Guard’s Leadership Development Center and the School Chief for Officer Candidate School both co-located on board the Academy. He has also served as an adjunct professor at Florida State University and was awarded the Federal Government Distance Learning Association Diamond Award for Leadership in Distance Learning.

While serving in Coast Guard Headquarters as the Assistant Commandant for Human Resources he served as a champion for the 55,000 women and men of the Service, always working to provide the finest care, service, and support for the entire workforce. He was responsible for all human resources activities from the initial recruitment and accession of new civilian and military members through all aspects of a member’s career to the care and oversight of pay and benefits for all retired Coast Guard military members. He was the Commandant’s Senior Executive responsible for carrying out the Service’s Diversity and Inclusion strategic plan where he implemented the Service’s first joint Affinity Group Council to provide a venue and a voice for the numerous affinity groups across the Service, he implemented significant policy changes to further the goals of diversity and inclusion within the Coast Guard’s College Student Pre-commissioning Initiative (CSPI) and he oversaw the Service’s first study of women’s retention issues in over 25 years. He also served as the Chair of the Coast Guard Academy Board of Trustees, President of the Coast Guard Mutual Assistance Board and President of the Coast Guard Non-Pay Compensation Board.

Rear Admiral Kelly is a Cutterman with over ten years of service at sea, including two command tours on board CGC SENECA and CGC MONOMOY. As Executive Officer in CGC SPENCER, he prepared and successfully led the crew for deployment with the U.S. Navy’s 6th Fleet in support of Operation Iraqi Freedom. Additionally, CGC SPENCER stood the watch protecting the ports of New York and Boston in the days following the attacks of September 11th. Rear Admiral Kelly’s major awards include the Legion of Merit (4), Meritorious Service Medal (4), the Coast Guard Commendation Medal (6), the Coast Guard Achievement Medal and the permanent Cutterman’s Pin.