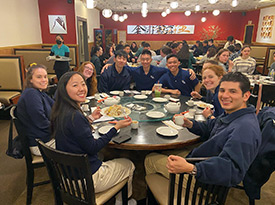 NEW LONDON, Conn – May is Asian American and Pacific Islander Heritage Month and the graduating class of 2022 had one of the highest number of Asian graduates. The Asian Pacific American Council (APAC) also hosted a creative event to help bilingual cadets preserve their languages.

The first language circle was held this past April. Each circle contained five cadets, with Chinese, Korean, Tagalog (Filipino), and Vietnamese teachers. The circles covered topics about each culture, shared culture specific snacks, and learned basic words/phrases in each language.

“How we came up with the idea was simple – a lot of first-generation Americans are bilingual, and we grow up speaking our parents’ native language at home. Usually, our parents and families are the only people that we speak these languages with, and when we leave home for college, we end up forgetting and losing a lot of it. Cadets here are no exception. We created language circles where cadets could connect with others that spoke the same language so they could reconnect with this extremely important aspect of their heritage,” said Third Class Cadet (3/c) Crystal Kim, APAC secretary.

Third Class Cadet James Schvaneveldt led the Japanese language circle and was thrilled to share the language and cultural influences. Born in Japan and returning again at age 5, Schvaneveldt was raised in the United States and learned Japanese fluently after high school during a two-year service mission.

“For the event we ended up going over basic sentence structure, some grammar principles about Japanese particles, and some common greetings and phrases,” said Schvaneveldt.

Schvaneveldt hopes to continue his study of Japanese and involvement in the language circles to one day apply it to his Coast Guard career out in the fleet.

“The language circle helped me connect to other cadets who speak Japanese and share the language with those wanting to learn it,” said Schvaneveldt.

See what else the Academy’s affinity councils have to offer.