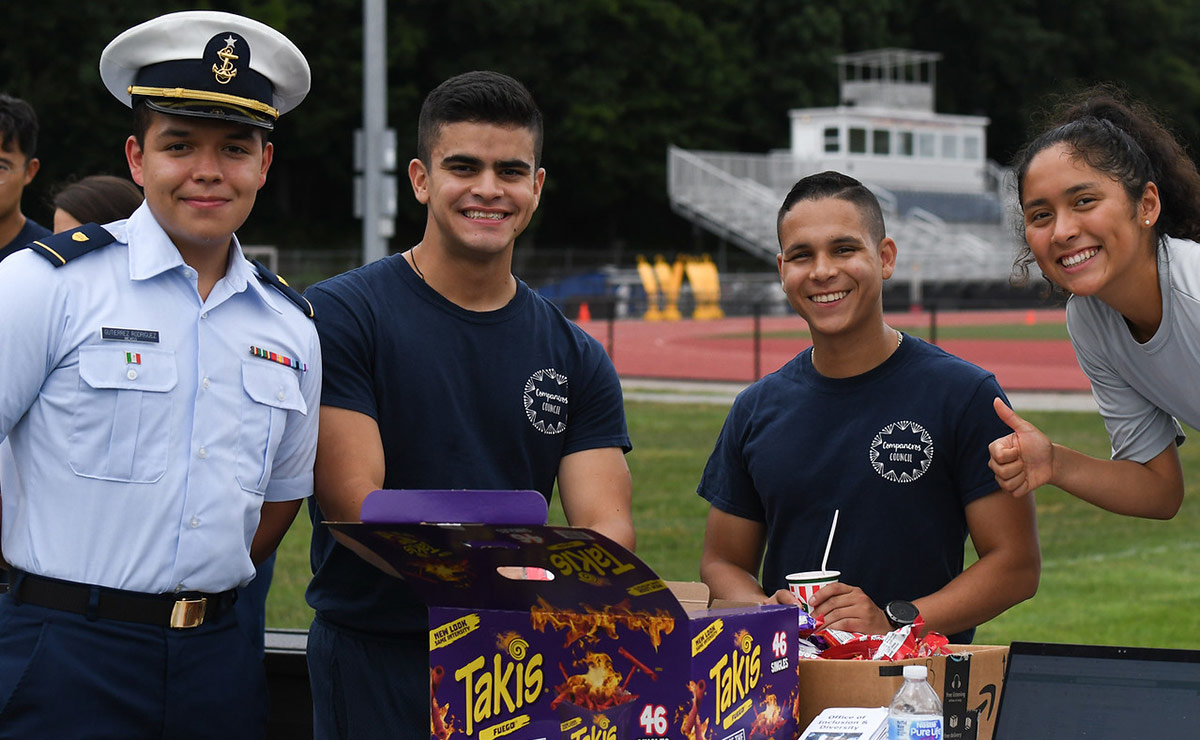 In today’s increasingly global world, understanding diverse cultures and embracing differences is essential to success. Given the challenges and far-reaching missions of the Coast Guard, wise cadets seek to strengthen their understanding of other cultures and faiths, while growing in their own tradition. As a result, they better understand themselves, those with whom they serve, as well as the public they will encounter.

Asian Pacific American Council
The mission of the Asian Pacific American Council (APAC) is to develop in our future Coast Guard leaders an appreciation for diversity in a complex Coast Guard workforce. APAC also serves as an opportunity for cadets to network with Coast Guard, international, and local community leaders. We build appreciation for and celebrate different Asian cultures and traditions through cultural events, community service, guest speakers, lectures, and social activities among the Corps of Cadets and with students from other universities. This club has been in existence for since 2004.

Cadets Against Sexual Assault (CASA) is a club of cadet volunteers who advocate for the best interests of cadets involved in sexual assault or harassment cases. Members conduct school-wide training on sexual assault. Not only do they facilitate mandated sexual assault training, but they perform volunteer work discussing current sexual assault statistics in the Coast Guard and other military services. CASA works closely with the ‘It’s On Us’ campaign, which was launched at the White House in 2014. The goal of this campaign is to end sexual assault on all campuses across America. Club members are committed to get as many cadets to take the pledge and commit to a safe academy environment.

Compañeros is a club where cadets, faculty and staff members with an interest in Latino culture and traditions can come together for fun, mutual support and service to the community. The current community service project is helping at El Centro de la Comunidad, in downtown New London. This non-profit organization helps recent Latino immigrants assimilate to life in the United States. Other club activities include taking salsa dance classes, hosting a Spanish Table twice a month during lunch where members can practice their Spanish, and participation in both USCGA’s Eclipse Diversity Week as well as the annual conference of the Association of Naval Service Officers’ (ANSO). Finally, the Compañeros also organize periodic guest lectures and trips to other colleges to meet with other Latino campus organizations.

Diversity Peer Educators are made up of cadets who volunteer to serve in the Corps of Cadets as “go to people” for information and support on topics surrounding sensitive subjects like race, gender, sexual orientation, and gender identity. Diversity Peer Educators’ primary goals are to create an inclusive and embracing climate for cadets to discuss race, gender and equality amongst the corps; to serve as “ears” in the corps to help alert the Superintendent’s Office of Inclusion and Diversity quickly of possible emerging concerns among cadets; and to give professional development training opportunities to members and stakeholders to provide the necessary skills and tools to discuss sensitive topics like race, gender, sexual orientation, sexual identity and equality.

The Genesis Council, the first Diversity Council at the Academy, was founded in 1973. Since its creation, the Genesis Council had succeeded at bringing cadets from a multitude of different backgrounds and walks of life together for positive discourse, intellectual stimulation and personal growth.

The Council provides the Corps of Cadets with opportunities to learn about and experience firsthand the history, cultural nuances and issues that characterize the African-American/Black diaspora today.

The purpose of the International Council (IC) is to expand the international perspectives and cross-cultural competence of the Corps of Cadets through education about foreign culture along with networking and support programs. The IC provides opportunities for cadets to meet with international counterparts and learn about their cultures. These opportunities prepare cadets for effective participation in the dynamic global society, broaden their awareness about international events and establish international networks that they can rely on in the future.

The Spectrum Council fosters the principles of leadership, professionalism, and respect by supporting the Coast Guard’s core values of “Honor, Respect, and Devotion to Duty” between all individuals regardless of their orientation. Supported through policy and fully sanctioned by the Academy, the Spectrum Council provides a support network for Lesbian, Gay, Bisexual, Transgender, Questioning, Intersex, and Asexual (LGBTQIA+) cadets and creates an educational experience for all cadets dedicated to the retention, development and commissioning of culturally and socially competent Junior Officers.

Spectrum, the first organization of its kind at a U.S. service academy, also educates the Academy Community and Corps of Cadets on matters pertaining to the LGBTQIA+ community.

The Spectrum Council has served the Academy’s cadet corps initially under the name “DADT Working Group,” and later as a council and support network for LGBTQIA+ cadets. Membership in the council, as well as participation in all Spectrum activities, is open to all USCGA cadets. The Spectrum Council joined the USCGA Diversity Council in 2011.

The Fellowship of Catholic University Students (FOCUS) is a team of four missionaries that are assigned to the Coast Guard Academy. FOCUS assists with religious education of Catholics, or other interested cadets, and promotes understanding of Catholicism. They liaison with other FOCUS teams at area colleges for combined events and work closely with the St. Francis de Sales Society.

The Fellowship of Christian Athletes (FCA) is a national organization with an Academy chapter. Their vision is “to see the world impacted for Jesus Christ through the influence of athletes and coaches.” The Academy chapter offers cadets the opportunity for athletes and coaches to gather as Christians to challenge and encourage one another, and to grow together in faith.

Jewish Hillel is an organization which promotes the Jewish faith, fellowship and understanding of the Jewish community among cadets, faculty and staff through a variety of spiritual and social activities. It is not only a network for cadets from a Jewish background but is open to the entire corps.

The Latter-day Saint Student Association (LDSSA) is an organization that promotes the Latter-day Saints faith and fellowship among cadets, faculty and staff through a variety of spiritual and social activities. Members meet weekly for spiritual instruction and information on LDS events in the region.

The Officer’s Christian Fellowship (OCF) is a non-denominational Christian association of cadets, faculty and staff. OCF’s purpose is to provide organized, Christian non-denominational fellowship that focuses on the military society. OCF sponsors various activities and retreats, and offers leadership opportunities within its organization.

St. Francis de Sales Society (SFDSS) promotes the understanding of the Roman Catholic faith among the members of the Academy’s cadets, faculty and staff, and provides community service and support to the New London community. SFDSS works closely with the Fellowship of Catholic University Students (FOCUS) team.