Home / About / Hall Of Heroes / 2019 Wall of Gallantry Inductees

Aviator delivers life-saving equipment and personnel during a Hurricane 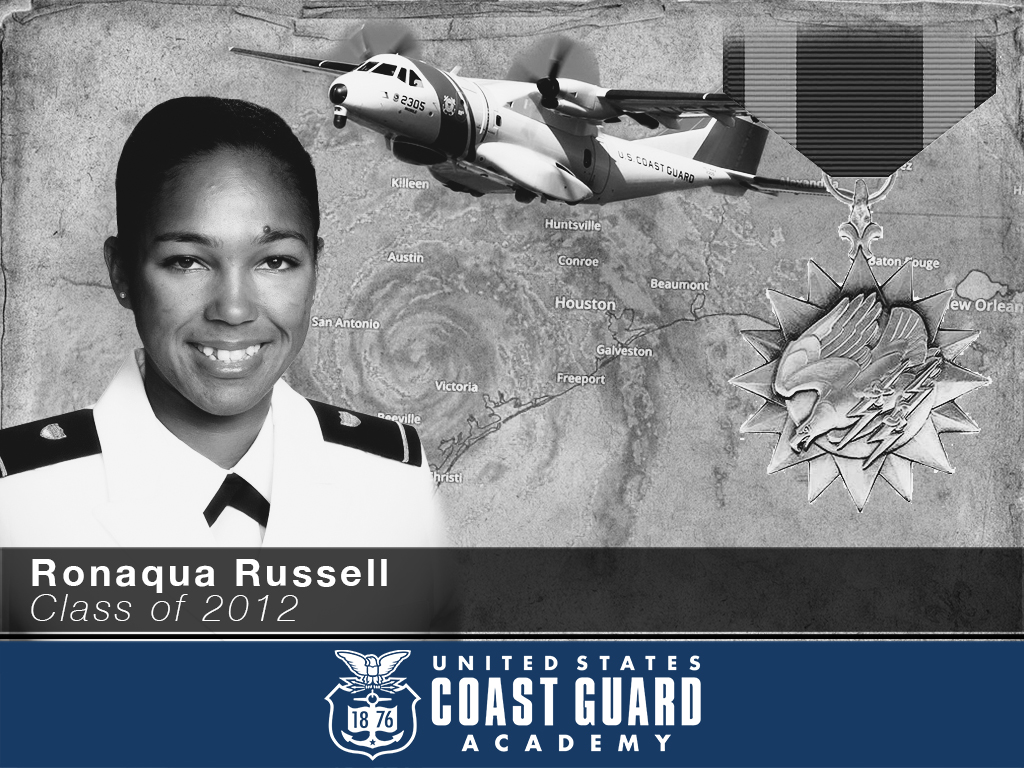 During the unprecedented hurricane season of 2017 six hurricanes became major storms that wreaked havoc and caused billions of dollars of damage.

One of the storms, Hurricane Harvey, was the first major hurricane to hit the U.S. mainland in more than 10 years. Harvey made landfall on three separate occasions destroying approximately 1,500 homes and unleashing some 52 inches of rain across the Greater Houston area and parts of the Texas coast during a five-day deluge.

As an HC-144 First pilot, LT Ronaqua Russell distinguished herself as part of the Coast Guard’s response to Harvey. An award citation recognizing her contribution states, “Due to widespread outages to air traffic control infrastructure, she provided expert navigation through embedded thunderstorms, heavy turbulence, and moderate icing just hours after Hurricane Harvey made landfall.”

The citation continues, “As the second fixed wing asset to attempt landing at Air Station Houston, Lieutenant Russell acted as pilot monitoring while executing a non-precision circling approach to minimums in heavy rain with less than one mile of visibility. After breaking out, she quickly assessed the landing environment, provided visual traffic separation from numerous low flying helicopters, and deftly chose the best runway to land, allowing safe delivery of eight mission essential personnel and 800 pounds of life saving equipment.”

LT Russell was instrumental in the service’s rescue and recovery effort in the aftermath of Hurricane Harvey, and would become the first African-American female aviator in the U.S. Coast Guard to receive the Air Medal.

The highest traditions of the U.S. Coast Guard and U.S. Naval Service 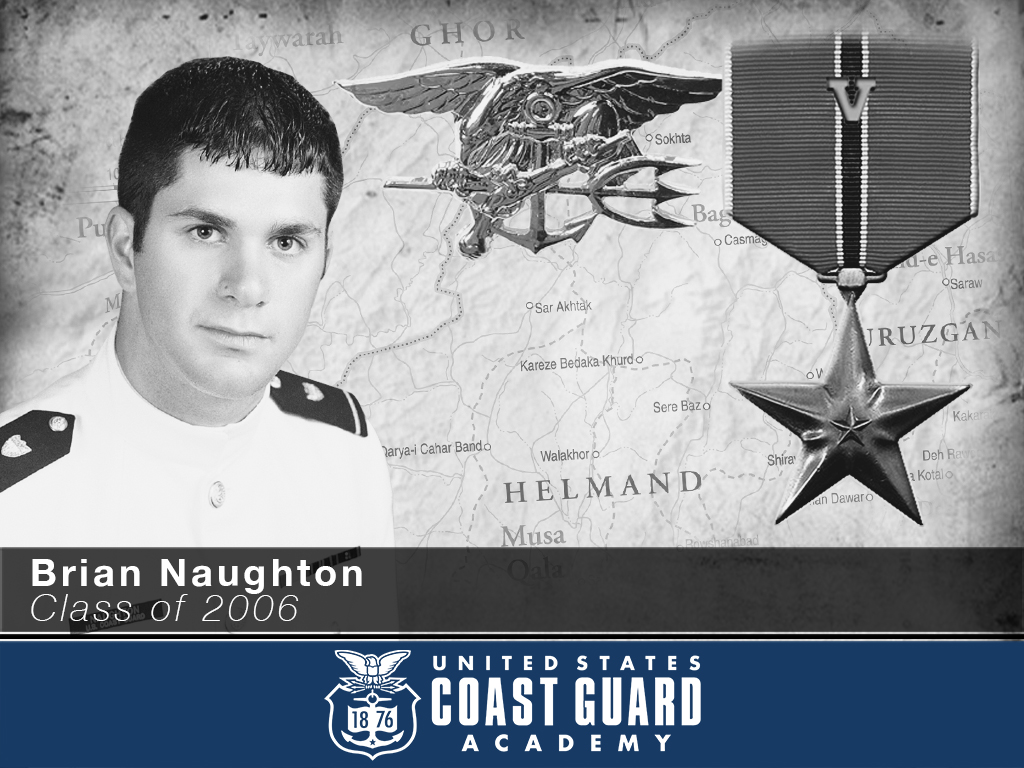 Since a Memorandum of Understanding was signed in 2008 allowing Coast Guard forces to contribute to the global war on terror, only a handful of Coast Guard personnel have endured SEAL qualification training, considered the most difficult training in the Armed Forces.

One of these Coast Guard members, LCDR Brian Naughton deployed in 2012 in direct support of Operation Enduring Freedom, the U.S. led combat mission in Afghanistan that targeted Al Qaeda and Taliban forces.

Naughton conducted Village Stability Operations in a strategically important region to provide security, governance and development in order to undermine insurgent influence and control. Demonstrating extraordinary leadership he led a group throughout the inception and construction of a Village Stability Platform in Helmand Province. In addition, his training of Afghan local police and the execution of more than 50 operations aggressively projected coalition influence into the region.

His leadership was instrumental to the expansion of security within the region and for his efforts Naughton was awarded the Bronze Star with Combat V device. The citation he received to accompany the award reads, “During an assault on the Village Stability Platform, his combined element came from under intense enemy fire. Despite the enemy’s numerical superiority and use of a small arms and rocket propelled grenades, he maneuvered under fire to counter the attack, simultaneously synchronizing a complex array of aircraft to leverage both aerial over watch and ordnance to destroy the enemy assaults.”

The citation concludes with, “By his extraordinary guidance, zealous initiative, and total dedication to duty L Naughton reflected great credit upon himself, and upheld the highest traditions of the United States Coast Guard and United States Naval Service.”

A successful mission in a high-risk environment 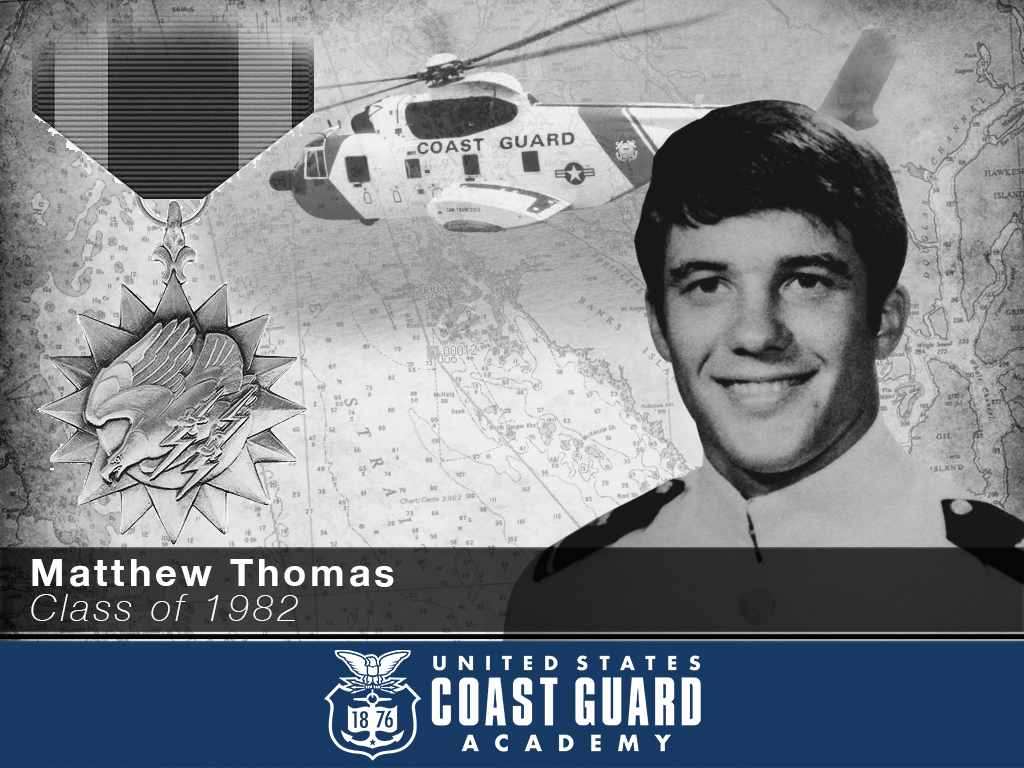 On the evening of Dec. 7, 1990 an aircrew from Coast Guard Air Station Sitka responded to a distress call from three people aboard a fishing vessel awash in heavy seas. One member of the aircrew was LT Matthew Thomas.

As the co-pilot of the helicopter, Thomas navigated more than 300 nautical miles from Sitka, Alaska to Hecate, British Columbia at night, in weather deteriorating to zero visibility with severe turbulence and winds up to 50 knots.

He worked to back up the pilot while attempts to recover the survivors were made in complete darkness. After 25 minutes of an extremely demanding hoist, he recovered the first survivor and rescue swimmer before performing several more hoists to eventually recover the remaining survivors.

Aviation Survivalman First-Class Roger Chivers dove into 35 degree waters with 25-foot seas to recover the survivors. He towed one survivor clear of the life raft for a hoist, but twice the basket was ripped from his hands and the victim flushed from the basket as the helicopter was blown backwards by the violent winds.

“I can safely say the most significant 10 seconds of my time in the Coast Guard was looking into his (Chivers) eyes in the back of the helicopter, where he knew I should not be,” said Thomas, “and asking him if he was willing to go back into the water, having him process that question, and say yes.”

Petty Officer Chivers removed the remaining two survivors from the raft one by one, towing each clear of the raft to the hoist basket. After both survivors were hoisted aboard, Chivers was hoisted to the aircraft and immediately began to assist in treating the hypothermic survivors. He would later be awarded the Distinguished Flying Cross. For his efforts, Thomas received the Air Medal, one of the four times he received the honor during his career.

“In operational language,” Mosely said, “it is a culture of mutual respect and team mentality resulting in a successful mission in a high-risk environment.”

First CG Cutter to deploy to the Persian Gulf 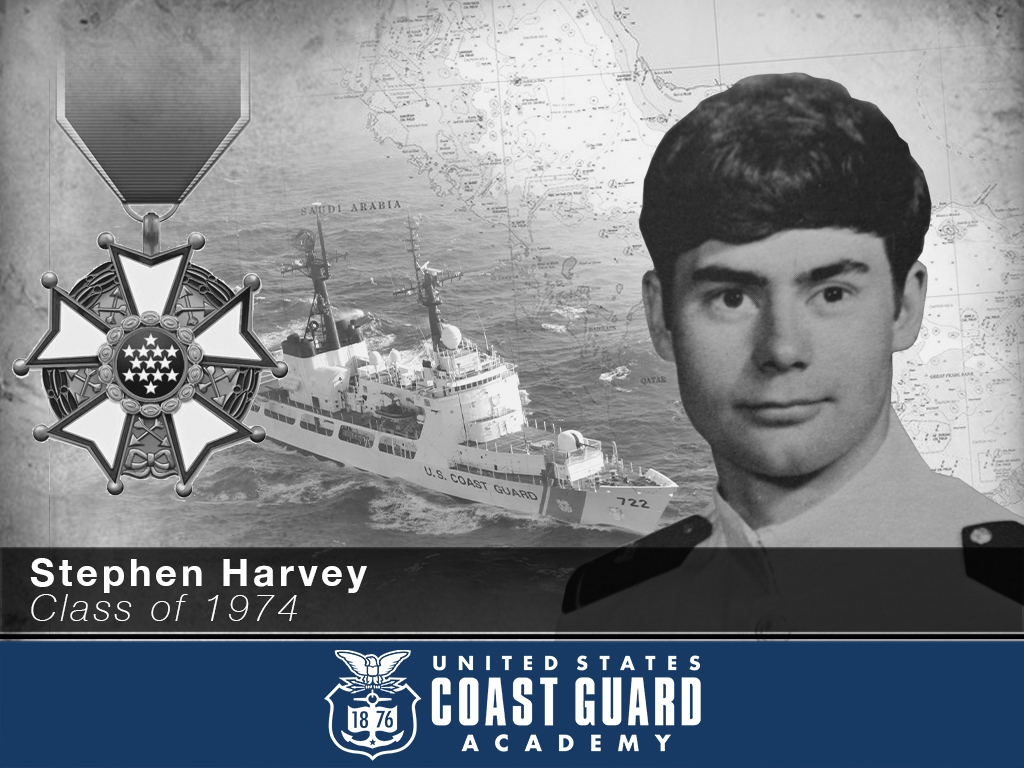 In the fall of 1996, the commanding officer of the 378-foot high endurance class cutter Morgenthau, Capt. Stephen Harvey, was faced with a unique mission.

Morgenthau was to become the first U.S. Coast Guard Cutter to deploy to the Persian Gulf. As part of Operation Vigilant Sentinel, the ship and its crew was assigned to help enforce Iraq’s compliance with U.N. sanctions that amounted to a near-total financial and trade embargo that began four days after Iraq’s invasion of Kuwait.

In recognition of this efforts Harvey was awarded the Legion of Merit for his devotion to duty and for outstanding meritorious service. The citation that accompanied with award states that Harvey, “faced with a demanding pace of operations instilled an extremely flexible, innovative and responsible mindset as the crew continually achieved even the most ambitious expectations.

“Captain Harvey’s thorough, insightful planning and foresight placed five combatants in a maximum state of readiness for their initial transit through the Straits of Hormuz and ensured safe passage through a potentially hostile area. Operating 12 miles off the coast of Iraq, Captain Harvey utilized innovative approaches to coordinate helicopter coverage with onboard sensors to effectively cut off illegal trade.”

Operation Vigilant Sentinel’s response quickly convinced the President of Iraq Saddam Hussein to withdraw his forces from the Kuwaiti border.

Loading and unloading dangerous cargo in a war zone 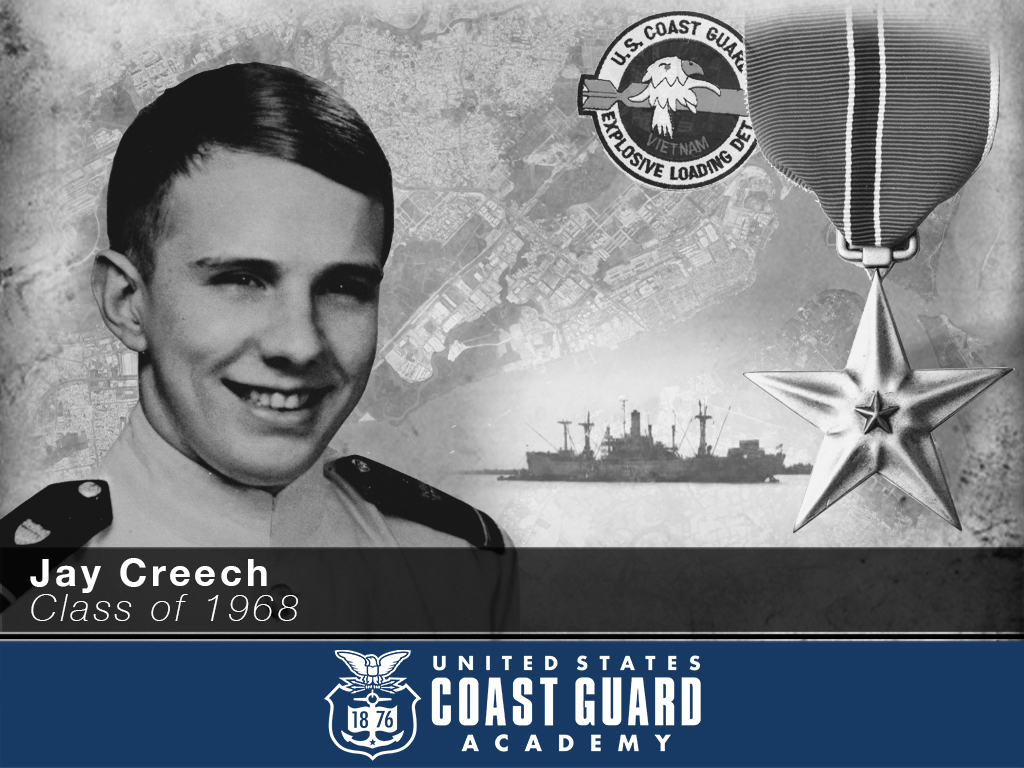 One of the missions of the Coast Guard is securing U.S. ports and during wartime the service is also responsible for supervising the loading and unloading of dangerous cargo.

Personnel assigned to Explosive Loading Detachments supervised the loading of tons of mortar ammunition and were rich targets for the enemy. At times only the quick action of CG personnel prevented the destruction of ships and terminals by the enemy. A few years earlier in Cat Lai an enemy rocket struck a barge loaded with several tons of mortar ammunition causing an explosion, starting a fire and injuring Coast Guard personnel and others.

ELD personnel were also active teachers and supervisors instructing U.S. Army and Vietnamese small boat operators on everything from how to perform maintenance on outboard motors to port fire-fighting and pier inspections.

At the conclusion of his tour of duty, Creech was awarded the Bronze Star medal for his service during the war. His citation states that his, “determination, aggressiveness, professional expertise and personal devotion to duty contributed immeasurably to the smooth and efficient cargo handling operations of the port of Cat Lai. He provided valuable guidance to the U.S. Army and Vietnamese Army personnel in the fields of waterborne security, port safety and the handling and stowage of explosives and munitions.”

Aggressiveness and alert attitude during the Vietnam War 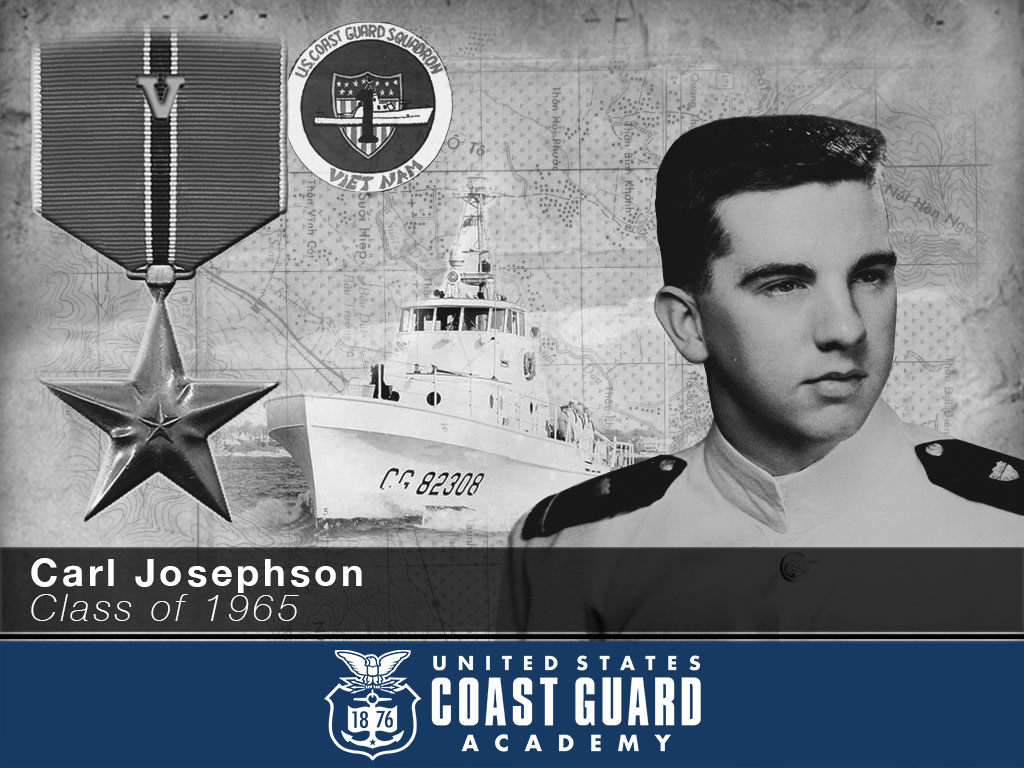 When Carl Josephson was a cadet with the class of 1965, a frequent sight in the waters around New London was the Point White, an 82-foot Coast Guard law enforcement and search and rescue patrol boat. A few years after graduating, Josephson was assigned as commanding officer of the Point White shortly after he arrived in Vietnam.

LT Josephson arrived in theater in the immediate aftermath of the Tet Offensive, one of the largest military campaigns of the Vietnam War, launched in early 1968 by Viet Cong and North Vietnamese forces against the South Vietnamese Army, the U.S. and their allies.

From 1965 to 1970, twenty-six Point-class cutters and their crews were assigned to the U.S. Navy with the mission of interdicting the movement of arms and supplies from the South China Sea into South Vietnam. The squadron also provided naval gunfire support to nearby friendly units operating along the South Vietnamese coastline.

The squadron was awarded several unit citations for its service to the U.S. Navy and the South Vietnamese government during the six years the unit was active with over 3,000 Coast Guardsmen serving. Six squadron members were killed in action during the time the unit was commissioned.

Josephson was awarded the Bronze Star medal with Combat “V” device for his service in Vietnam. His citation reads, “His aggressiveness and alert attitude during combat patrols resulted in the apprehension of several Viet Cong suspects. On numerous occasions, he directed his unit’s mortar and machine gun fire at the enemy. His exceptional initiative, professional ability and courage greatly contributed to counter-infiltration efforts of friendly forces at a time of increasing war tempo.”

The success of Squadron One’s blockade changed the dynamics of the Vietnam War, forcing the North Vietnamese to use a more costly and time-consuming route down the Ho Chi Minh trail to supply their forces in the south.