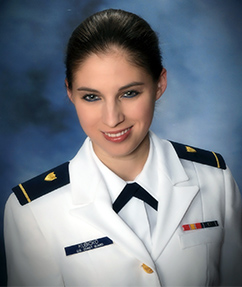 First Class Cadet Jacquelyn Kubicko, the Marine and Environmental Sciences major, is the 2016 Coast Guard Academy’s distinguished graduate. 1/c Kubicko has received a 2016-2017 Fulbright U.S. Student Award to study in the United Kingdom. As a Fulbright scholar, Kubicko will be conducting research in physical oceanography with applications to climate change. By studying the ocean dynamics caused by climate change, Kubicko will contribute to international climate policy initiatives. She also recently received orders to flight school.

As a cadet, Kubicko conducted research in the field of acoustic tomography aimed to image physical characteristics of the ocean in order to contribute to the accuracy of climatological models. During her junior year, she focused on analyzing how sound moves through seawater to measure ocean properties such as pH and temperature using passive acoustic techniques. The project was supervised by her instructor at the Academy, LT Christopher Verlinden, and the Scripps Institution of Oceanography.

In the summer of 2015, Kubicko assisted with research to explore deep-sea hydrothermal vents off the coast of the Galapagos Islands, Ecuador and was supervised by Dr. Robert Ballard, noted for his discovery of the RMS Titanic. Her senior year research, supervised by Dr. Karim Sabra of Georgia Institute of Technology and LT Christopher Verlinden, involves developing methods of measuring temperature changes in coastal areas and under sea ice. Her undergraduate research has inspired her interest in pursuing further study in ocean sciences and has provided a solid foundation for continuing research on climate change. By developing models for analyzing ocean characteristics, she will be able to apply her undergraduate research findings and experience to the projects she was invited to undertake at the University of Southampton.

1/c Kubicko is also the Coast Guard Academy’s second recipient of the Collegian Innovation and Leadership Award for her research contribution in the field of acoustic tomography aimed to image physical characteristics of the ocean in order to contribute to the accuracy of climate change and acidification models.

The Coast Guard Academy has been proud of 1/c Kubicko as she conducted graduate-level scholarly work and carried out independent research that brought her unusually high praise and has inspired other cadets to follow her example. Ms. Kubicko’s leadership and dedication to public service, coupled with her passion for science, and her innate modesty made her a proud recipient of this prestigious award.

1/c Kubicko is also the recipient of several prestigious awards that include: the Tomorrow’s Leader Laureate Award from Aviation Week magazine introduced by NASA Administrator and astronaut, Charles Bolden, Jr., Board of Trustees List honors for displaying excellence in academic, military, and athletic performance; the 2012 President Obama Recognition of Educational Excellence Award; the 2014 Commandant’s Undergraduate Award – presented to the cadet with the highest academic standing; the Commandant’s Flag Letter – recognizing occupancy as first in class ranking by the Commandant of the U.S. Coast Guard, Admiral Paul F. Zukunft; the 2014 George C. Alexander and Robert T. Alexander Excellence in Advanced Physics Award; the 2013 George C. Alexander and Robert T. Alexander Excellence in Advanced Chemistry Award; the Class of 2009 Writing Award in 2013; the National Defense Service Medal; Marksmanship Ribbon for Pistol (with Sharpshooter Distinguishing Device); Command Coin earned by Chairman of the Joint Chiefs of Staff, General Martin Dempsey, for outstanding military performance; and most prestigious, the U.S. Coast Guard Academy Alumni Association Undergraduate Award for the Highest Cumulative GPA over the course of time at the Academy.