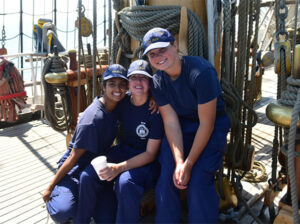 The last time she was on EAGLE was as a swab. Three years later, she stepped aboard America’s tall ship in a leadership role this summer.

“Onboard EAGLE as a swab, my main job was to follow orders and show up to tasks on time. My role as a first class (1/c) on EAGLE was much different. I was now the one giving orders and ensuring the underclass were where they were supposed to be,” said 1/c Lindsey Blake.

Blake was a division officer directly in charge of six third class (3/c) cadets, making sure they attended their watches, trainings and made progress on their qualifications. She was also the Cadet In Charge (CIC) responsible for all of the cadets on board.

“As the CIC, one of the biggest responsibilities that I had was to pass along important information from the EAGLE command to the other 1/c in order to ensure that they could pass it along to their divisions,” said Blake.

Blake found a lot more opportunities for leadership aboard EAGLE during this summer assignment, having more authority while managing time and her division. Thanks to the training she received in the classroom, she was better prepared for such responsibilities.

“Every semester at the Academy, we are assigned to a division that has at least one cadet from each class. As the underclass within a division, your main job is to do whatever task is assigned to you by your upper class and help where you can. As an upper class, you are now responsible for making sure division work gets done as well for the performance of everyone within your division. It was nice to have the same structure on EAGLE as we did at the Academy because everyone was familiar with it,” said Blake.

Graduating this upcoming May, Blake is looking ahead at her officer career in light of this summer experience.

“After spending my summer on EAGLE, I feel more prepared than before on my ability to manage more work as well as stress. I also feel more confident in taking on the division officer role as a 1/c at the Academy since we got a lot of experience with that,” said Blake.

Blake is ready to take on her role as a junior officer in the Coast Guard.

“Since EAGLE is a training ship for cadets, the majority of our time underway was spent standing watches to earn qualifications that are actually applicable when we graduate. I spent most of my watches on the bridge since I want to be a Deck Watch Officer, and it was great to be able to do that since I was able to learn a lot about the job that I will be doing by getting valuable firsthand experience prior to even starting my 1/c year at the Academy,” said Blake.

Learn more about the EAGLE.