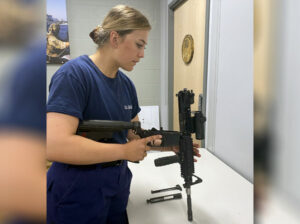 With weapons handling, tactical egress, responding to traumatic injuries and learning all about the MK19 grenade launcher and the .50 Cal machine gun, there was no shortage of adrenaline during Dewey’s summer assignment. Her six-week training period in North Carolina on these skills prepared her for deployment to Bahrain with Patrol Forces Southwest Asia (PATFORSWA).

“The Coast Guard’s primary mission in Bahrain is to assist the Navy’s 5th fleet and provide maritime security in the Arabian Gulf,” said Dewey, a management major.

In Bahrain she spent most of her time underway supporting the Naval crew.

“While we didn’t expect to take on any actual combat roles in PATFORSWA, my acquired training did help increase my awareness and confidence in the event something unexpected were to happen,” said Dewey.

Dewey’s responsibilities included conducting training and making presentations to the enlisted crew, getting qualified in Helm, Lookout and Quarter Master of the Watch to help lighten duty schedules, and observing and volunteering for roles to further develop her junior officer skills. While she was taking the lead on many initiatives, she learned the importance of not second-guessing her abilities and to be confident.

“I learned to trust that my command would not ask anything of me that they didn’t think I was ready or qualified to handle. I was very fortunate to have a command in Bahrain that trusted in my abilities and encouraged me to take on tasks well outside of my comfort zone. As a result, I completed my summer assignment with much greater confidence in my abilities than I had going in,” said Dewey.

Returning to the Academy and reflecting on her experience, Dewey points out the biggest takeaway from this summer assignment.

“I learned that every mistake, even the ones that seem insignificant at the time, have consequences that must be acknowledged and managed. As a future officer in the fleet, it will be my responsibility to deal with the consequences, learn from them, and whatever steps are necessary to ensure those mistakes aren’t repeated. On the other hand, another takeaway I learned is to never shy away from these great responsibilities and to jump at opportunities for development. Living a life and Coast Guard career with fear of these consequences will only produce a mediocre officer,” said Dewey.

Dewey’s assignment is just a glimpse of the careers that await officers in the Coast Guard.