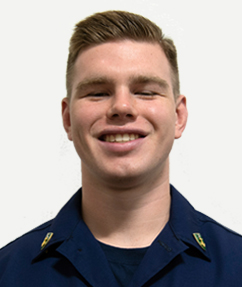 Anyone coming to the Academy for Swab Summer knows that they’re in for a rough seven weeks; however these people are wrong. Six of those weeks are definitely tough; they’re the indoctrination into the Academy. However, one of those weeks is spent on EAGLE, the Coast Guard’s tall ship used to train cadets and officer candidates. This week provides a nice break from the toils of Swab Summer, or in my case, a fun trip after the summer is over. One thing that you can say after sailing on EAGLE for a week is that probably none of your friends did something that cool in the summer before college. In this blog, I’m going to briefly tell you about my Swab Summer EAGLE trip.

Over the summer I was in Zulu 1 platoon, meaning that I was one of the last platoons to go on EAGLE. It was challenging to see all the other platoons go on EAGLE before mine because we knew they were off sailing and having a good time while we were all still doing push-ups and screaming our heads off. The light at the end of the tunnel was that we knew that we would get all the way through Swab Summer and have a week break on EAGLE before starting the school year. After thinking about it, I realized that I preferred for my summer to work out this way. When we finished the summer training with Sea Trials, the entire platoon was eager to get on the bus the next morning and make the trip to Salem, Massachusetts where we would begin our journey.

We arrived in Salem the morning after Sea Trials. The bus ride there was pleasant because I got to talk to my parents and friends on the phone for a few hours. The 20 bucks I paid for a pair of earbuds at the Exchange was super worth it. After loading our stuff onto the ship and packing in, we had a brief introduction to the ship and its crew. EAGLE is manned by a full crew of enlisted and officers that help train cadets and sail the ship. In our case they sailed the ship the entire time because we had no idea what we were doing. We were granted liberty and got to enjoy the afternoon in Salem. I got super lucky on EAGLE because my division ended up being really small; too small to take duty in port. We were still surprised when we heard that the next day we had a full day of liberty again. After hearing this, my friends and I hatched a plan to take a train to Boston, one of my favorite cities. Having to go out in liberty in uniform gets to be a hassle as one progresses further into 4/c year; however it definitely helped out in Boston. The people there were super supportive of the military, especially the Coast Guard, and we had a great time.

Don’t get me wrong; sailing on EAGLE is nothing like a vacation. The time we spent sailing on the ship brought its own challenges, such as waking up at midnight for watches, learning how to plot points on a chart, or shining all the brass on the entire ship. I would say that the most important thing that you learn on Swab Summer EAGLE is how to be underway in the Coast Guard. You learn the basics of living and working on a ship, which is important for your greater career in the service.

After sailing for a week, we arrived in New York City. Sailing into New York Harbor was one of the coolest things I have ever experienced, especially as a midwestern landlubber who has never been on a ship at sea. We anchored next to the Statue of Liberty for one night and eventually docked the next day. Taking in the city that night, I knew that the Academy was the right choice for me and I suddenly got really excited for all of the great experiences I’m going to have throughout my career.