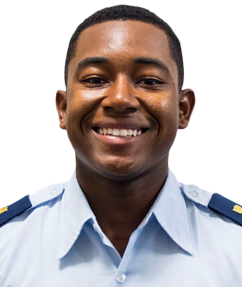 When I first came to the Academy, I was a Marine and Environmental Sciences (MES) major. In the early spring of 4/c year, I switched to be an Operations Research and Computer Analysis (ORCA) major. Since then, I have loved my major and am blown away with the cool stuff we do. ORCA is more than just math and coding, it helps you think from new perspectives. Personally, I love thinking logically and analytically. The ORCA major does just that.

Since I made my switch to ORCA, I have never considered switching to another major. One reason I stayed was because of the faculty. The teachers in the Math Department are amazing. They are always there to help you with anything and make incredible mentors. In my opinion, they are the best teachers on campus. They realize that the material we cover can be hard sometimes, but they are always willing to sit down and help you understand it.

When I switched into the major, I did not know much about it. We had presentations from all the majors about all the work that they did. This was all I knew about ORCA. The presentation cleared up all the misconceptions I had about this program. It showed how applicable the major was in and outside and the Coast Guard. Another selling point for me was that for our capstone projects, the Coast Guard sends the Academy current problems to solve and we get to solve them. Even as cadets, we can have a direct impact on the fleet. This is the type of challenge that I like!

I did a fair amount of research before I changed majors. I talked to my previous academic advisor and the ORCA faculty as well. In addition to that, I used the Academy website to learn about every major. The most impactful in my decision was talking to the upperclassmen. When I played rugby, most of my teammates were ORCA majors and they encouraged me to switch. They described it as the “slept-on” major because it is the perfect balance of free time and challenging work. As a 2/c, I can attest to that. I spend about four hours a week studying for my classes. A pro tip would be to do this studying during the free periods you have.

The easiest part of the major are the math classes, such as Multivariable Calculus and the optimization classes. They still have a certain level of difficulty, but they are the easiest classes you may take. The hardest classes are the ones that involve coding. I never coded until I took Computer Model Languages and it was like learning a new language. To those who code frequently, it’ll be a walk in the park. If you have never written a line in your life, rest assured because the faculty will be there to help you out.

In terms of how I prepared for ORCA in high school, I did not. I focused on science classes, because I thought I was going to be a MES major. Some computer classes were offered, but I chose not to take them, simply because I didn’t think I would need them. In terms of the calculus classes, I was not very prepared. I was placed in pre-calculus and worked my way to get on pace with my classmates.

To those that want to be ORCA, just get ready to work. Have no fear though, you will never feel overworked, and always ask your teachers for help. Those are the only tools you’ll need to succeed!