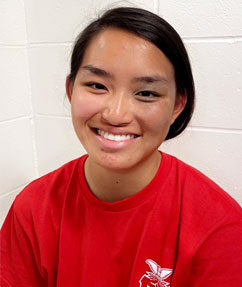 This past summer, the Inter-Collegiate Sailing Association National Championships were held in New Orleans, Louisiana and the sailing team hit the water running for training as soon as finals ended! While all of our classmates were beginning their military summer training, we spent our first week of summer at the Coast Guard Academy scrimmaging with nearby schools such as Connecticut College, Yale, and Brown. The Tuesday of the second week, the whole team headed to the airport not so bright, but early, at 3 AM. The Women’s team headed for Charleston for another week of training, and the Coed team headed to New Orleans. Upon arriving in New Orleans, the coed team got to explore downtown New Orleans and buy plenty of souvenirs and gifts. The next day, we got to explore the Tulane’s venue for nationals, Sourthern Yacht club, and watch the Team Racing Nationals. Then, we made our way to Café Du Monde for amazing beignets.

The first two days of nationals were the semifinals. The 36 teams that qualified split into two groups of 18 and the top 9 from each group made it to the finals. It was incredibly hot and humid, but the starters did a great job, and the alternates were very attentive bringing water, liquid I.V., sandwiches, and snacks to keep up the energy on the water. Although not starting, I had the opportunity to sail 8 races out of 18 in each event. We ended up placing 5th in the semifinals and 16th in the finals.

Women’s nationals started the day after coeds ended, and many of us who had sailed in coeds went into women’s very tired, but able to utilize our experience at the venue. I got to sail 6 out of 13 races in the semifinals and 6 out of 11 races in the finals. We placed 8th in the semifinals and 15th in the finals. One thing that was different from coeds to women’s was that the wind was more variable, at times very light, and other times the wind was gusting as high as 35 knots. Since many of the women weigh less than men on the coeds team, there was more strategy needed when sailing and switching different sized sailors in the varying wind.

At both women’s and coeds, the fleet was so strong and condensed in the finals that everyone seemed to be able to read the water, knowing where there would be more wind and how the wind would change direction in the future. The ultimate factor seemed to be boat speed, who could move through the waves and surf them downwind, and who could set up their boat and weight distribution. Equally as important was how boats chose to interact with one another, who could place themselves at an advantage to the maximum number of boats.

We were a little disappointed with our placing in both finals, but the racing was exciting and a great learning opportunity for us. As a young team with only one senior last year, we’ve really been able to take all that we learned from nationals last year into this season. We’ve been really happy with our progress, placing 2nd at the Captain Hurst Bowl and the Danmark Trophy, and placing well in both rounds of Atlantic Coast Championships.