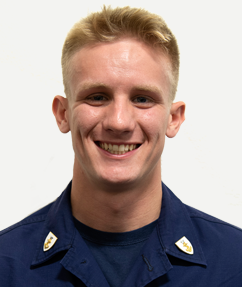 It’s about halfway through my second semester as a 2/c cadet and closing in on the end of the hockey season. We have had our fair share of challenges this year as a club team. First, without a coach running our practices, our captains have been forced to act as player-coaches and plan out and run practices. This has challenged us to find ways to point out our own mistakes, motivate each other, and come together to achieve our goals without the significant help of a coach, at least at practices. At the beginning of the season, there was definitely a difference between the way our team felt than in my last two seasons. Things felt tense and we all felt kind of disconnected from each other, in large part due to the feeling that our captains, who were having to play a very difficult role, were sort of secluded from the team. In our first six games, we lost the same amount of games that we lost all of last season. Things were looking pretty bleak for us, especially since we had far more talent this year than I have seen before.

Fortunately, those kinds of challenges, when faced head-on as a team, can make you stronger than the teams that have never had to face those challenges. We wake up at 4 in the morning every morning to practice, we eat dinner together, and when things were feeling off like they were a teammate and I talked to the captains and we came together as a team to figure things out. All of these extra things that we do bring us closer, and the meeting re-solidified that bond. We didn’t lose another game in the regular season, and in fact, we were beating teams that should’ve been close by blowouts. Oh and we beat our rival Conn-College who is a division higher than us for the first time in over a decade. Our groove has steadily been picking up. Last weekend we had our conference playoffs and we made it to the finals. At the finals, we didn’t finish with the outcome we were hoping for, but we have spent a lot of time looking over our mistakes, and we were fortunate enough to have a parent who coaches step in to help us for two practices. In two weeks, we have our regional tournament which could give us a bid to the national tournament.

All of those challenges at the beginning of the season, seem like a distant memory, but without them, I don’t believe the team would be where it is now. When we need to ramp up the pressure in a game, we have the ability to dig deeper than the other team because we’ve had to work that much harder to follow our hockey passions.

I am looking forward to the rest of the season. Hopefully the next time I write the big bad bears will be heading to Austin, Texas! Go Bears!