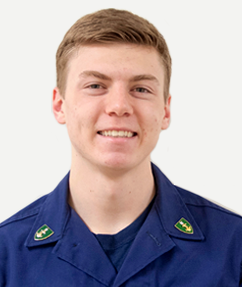 I was on the fence about if I should do it or not; but I figured most of my classmates were doing it this summer. I wanted it over with.

The Pepper Spray Test. As a Coast Guard officer, you must do it at some point to be a part of the boarding officer teams or security detail. Otherwise, you are somewhat limited in what missions you can do. I was stationed on Cutter Vigilant in Port Canaveral, Florida where two cadets at the station, two enlisted, and myself were going to get pepper sprayed. It was decided a few weeks back that five of us were to take the test in the last week of the cadets being there.

It was the evening before the test, and the brief was in a few minutes, so I headed over to the station. The enlisted were explaining to the five of us how to use the pepper spray, how it would feel, and what we were supposed to do. Just seeing the can of spray made me nervous. They told us we needed a caretaker to walk us around after we got sprayed and that they recommended “no- tears” baby soap to clean off your face and eyes afterwards. We then were asked to pick an order. I had heard from upper class cadets to not go first because the potency in the pepper spray is greater. However, I also did not want to see the suffering of everyone else before I was up- it would just make the anticipation worse. I ended up getting second, which is what I wanted.

I woke up the next morning with so much dread. It was an hour before we were supposed to meet outside on the patch of grass. I realized I didn’t have any of the things we needed that they told us from the brief. Luckily, the non-rates I had been working with all summer had brought me 3-4 different bottles of soap and they were all willing to be my caretaker for the day. It was a relief, but my heart was still racing in anticipation of the pain I was about to endure.

We were now all sitting at the picnic table, being briefed one last time. Then, the first guy is called up. I was thankful it was an enlisted guy- I figured he would take it like a champ and give me some confidence. I was so wrong.

He gets sprayed- a lot more than I anticipated. They caked on the spray for what seemed like five seconds. He opens his eyes and immediately begins swearing and screaming at the top of his lungs. He was not handling it well, but he begins to stumble through the procedures of the test. He shouts to alert his imaginary partner that he has been sprayed but needs help, all while fighting off an opponent and protecting his weapon. The simulated enemy was a huge enlisted guy with an arm pad. It was difficult to watch, but after a minute it was over, and I was up next.

I stepped to the middle of the grass with my eyes closed. I was nervous, just like the beginning of a championship game. I hear the can sizzle as the spray hits my face for what felt like forever. Finally, the sound from the can stops and I open my eyes. I scream, “I’ve been sprayed, OC! I’ve been sprayed!” as we were instructed to do. My eyes didn’t want to stay open though, and I immediately felt the pain. My heart pounded faster, and I could feel the adrenaline numbing the pain. I turn to the simulated enemy, protecting my weapon and holding him off with my other hand. My eyes were clamping shut, so I started blinking as fast as I could to see the bad guy in short flashes. Darkness, a blur of figures and green. And more darkness! The pad came at the side of my face. Hard. Next thing I knew, I was lying on the ground. I bounced back on my feet but couldn’t find the enemy. Darkness. Blur. Darkness. Blur. I circled and quickly spotted him coming in for an attack. I dodged him sideways and kept tracking him. After what felt like an eternity, the instructor yelled the last task of the test. “Draw your weapon!” I unholstered my gun and screamed at the padded enemy to get on the ground. I was raging with anger and pain. He wasn’t complying so I screamed aggressively and shoved the gun in his face. The enemy was the only thing standing between my burning eyes and an ice-cold bucket of water to dunk my head in. He laid down for me to handcuff and arrest him. The test was over. The adrenaline stopped. The pain began to multiply, I couldn’t stand it. I raised my hands above my head so the instructor could unhook my tactical belt. He fiddled at it and I couldn’t bear the pain any longer. There was relief just ten feet away in the ice water bucket, but my belt was stuck. My eyes, face and arms were burning. Finally, it unclipped and I held my eyes open with my fingers, looking for the bucket. I sprinted to it and dunked my burning face into the cool water. The pain was so unbearable that I couldn’t breath and began hyperventilating. This made it nearly impossible to get any relief as I was nearly sucking in water. After a few dunks, I was walked to the shower to use my baby soap. I started running because the Florida summer sun burned- I needed more water and soap. Now.

Being pepper sprayed was one of the hardest things I’ve ever done. I never wish to do it again but was glad I did it. It made me grow as a person and discover a part of me I’ve never been to before. The pepper spray qualification is an extreme but accurate summation of being at a service academy. It is type two fun- something you appreciate and enjoy after the fact. While doing it, the task may be challenging and tough, but you feel good about it afterwards. It takes you places you’ve never been before. You go past the comfort zone to grow and learn about yourself. That is so valuable, and I challenge you to do something that pushes you to a place you’ve never gone before. Whether that be skydiving, doing a public speech, or running a marathon. Hope you got a good laugh out of this and found it entertaining – because I’m not doing it again!