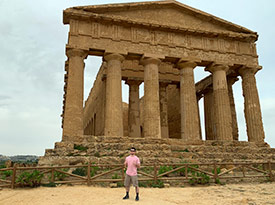 NEW LONDON, Conn – A tour of Italy kicked off First Class Cadet Adam Pagliarulo’s summer. His three-week stay abroad included visits to Rome, Florence, Lampedusa, Palermo, Agrigento, Ragusa, Syracuse and Taormina. His only guideline was to plan his agenda and immerse himself in Italian culture, so he made the most of it.

“The other cadets and I toured museums and archeological sites, met some staffers at the embassy, Italian Coast Guard, and talked to non-governmental organizations about the migrant crisis that’s sweeping the European Union right now,” said Pagliarulo.

While a flexible schedule, eating out at 8:00pm and celebrating local holidays may seem like a leisure trip, it reinforced critical components of leadership development.

“Creating this trip from scratch was a peek into the world as a Coast Guard officer. At the Academy, we have people telling us what to do and a lot of our events are done for us. This planning gave me a glimpse into what that world of self-management looked like. Leaders need to be able to communicate and adapt to their environment. Thrown into a chaotic environment like a foreign country forces us to do that,” said Pagliarulo.

“I memorized a couple phrases in Italian and used other languages that I knew of, and other verbal cues to find a way to communicate with people. Though difficult, as long as you found ways to express your intentions and what you wanted, the other cadets and I were able to make it through without a problem. By the end of the trip, I could make it through an entire interaction with a waiter or vendor in Italian,” said Pagliarulo.

Pagliarulo attributes accepting peoples’ differences as being a characteristic of effective officer leadership. While in Italy, he observed many cultural distinctions, including eating dinner at 8:00pm.

“After lunch, the locals had a coffee break. I also noticed how early they closed up their shops and got off work and how they value their free time and personal lives much more than working,” said Pagliarulo.

The Olmsted Scholar Program is an opportunity offered to Coast Guard officers that involves earning a graduate degree in a foreign country. This summer experience was a primer for Pagliarulo.

“Being placed in a foreign country to learn the language and culture to get a deeper understanding and appreciation of the people there is what Olmsted is about. This was the first time I had spent that long outside the country before and being in another country is somewhat intimidating at times. Now that I’ve been through it however, I know what to expect if I were to do this again.”