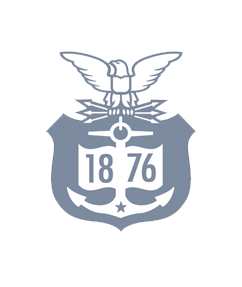 Lieutenant Commander Thompson earned a B.S. (with highest honors) in Marine and Environmental Science from the Coast Guard Academy in 2008. Her first assignment after graduation was as a Deck Watch Officer on USCGC WILLOW (WLB-202) in Newport, Rhode Island. LCDR Thompson then transferred to District Five Waterways Management and later to the National Aids to Navigation School, where she served as the Operations Section Chief and Instructor. She served temporarily on USCGC SEQUOIA (WLB-215) in Apra Harbor, Guam as the Operations Officer. She then served as Executive Officer of USCGA ASPEN (WLB 208) in San Francisco, California. Her last operation tour before the Academy was as Commanding Officer for USCGC JAMES RANKIN (WLM-555) in Baltimore Maryland. LCDR Thompson is a permanent cutter man and member of the Prevention Afloat community. LCDR Thompson earned her M.S. in Physical Oceanography from the University of Rhode Island in 2019, and is now a marine science instructor at the USCG Academy. LCDR Thompson’s research at the University of Rhode Island ice formation in the Ross Sea, Antarctica.