The competition kicked off at 0800 on Friday morning with a safety and operations briefing for all personnel to mitigate the risk of the flight events – aligning with the Coast Guard practice of risk analysis for fleet mission operations. The events included cross country flight planning & navigation, an Instrument Flight Rules (IFR) simulator course, precision power-on and power-off landings, a target message drop, an aircraft recognition exam, an E-6B Flight calculations exam, and a written knowledge test. 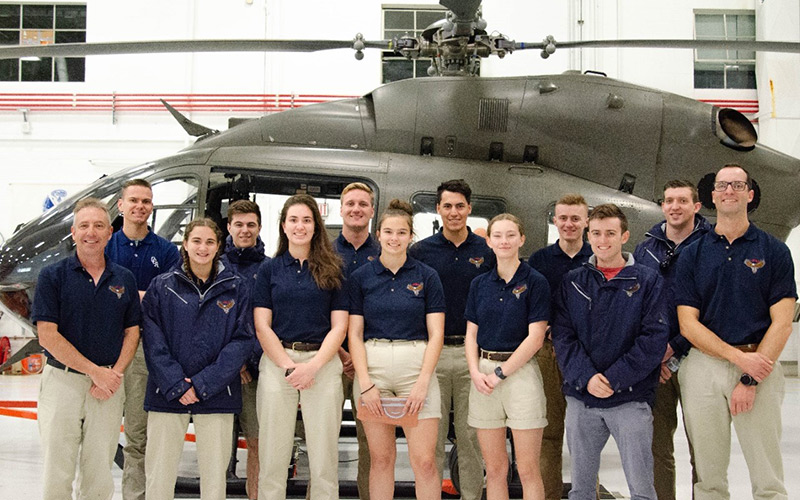 1/c Paul Gerlach, Team Captain, commented on the competition environment, “it’s great to get a good result but safety is our number one priority.” His favorite event was the message drop. He said it was exciting to “fly low above the airport with the rain and wind gusts, while executing the drop procedure with the Drop Master, Riley Vicinanzo, in the right seat. When the door was open the wind and rain rushed in, it was noisy as I [he] gave the command ‘drop away’ and the capsule fell away towards the target on the ground.”

Coast Guard Cadets engaged in both competition and camaraderie with Cadets from West Point and Midshipmen from the Naval Academy. Cadet and Midshipmen Aviators alike shared their experiences and worked collaboratively to cover ground handling responsibilities, keeping the aircraft events running smoothly. 1/c Devin McClure shared his remarks on the event: “The Inter-Service Flight Competition has been missed amid the pandemic and poor weather in the past three years, but the Coast Guard Academy has an active group of aviators who will lay the groundwork for the future team.”

Head Coach, CDR Angelo shares his enjoyment of watching the Cadets coming back smiling, flying safe, having fun and learning something about Aviation. Chief Case observed the teams’ progress through the academic year, he is proud of the work put in by the Cadets to promotes safety, fun and learning in an aviation environment as an extension of the Academy experience.