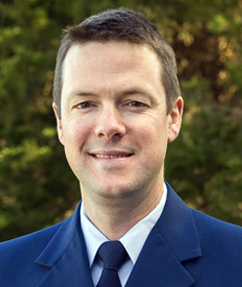 CAPT Seals joined the faculty at USCGA in 2004 and was selected as a member of the Permanent Commissioned Teaching Staff in 2009. His research focuses on the use of satellite navigation systems in challenging or deceptive radio frequency environments. While at the Academy, he has enjoyed sailing as a Deck Watch Officer aboard the Coast Guard tall ship EAGLE and as a safety officer for the offshore sailing team, the summer ocean racing program, and the coastal sail training leadership development program.

Prior to joining the Coast Guard Academy faculty, CAPT Seals earned a Second Mate of Steam and Motor Any Gross Tons Upon Oceans merchant marine license after serving aboard two Coast Guard ships. He served as the Executive Officer of the patrol-boat Wrangell out of Portland, Maine. While stationed aboard the icebreaker Polar Star in Seattle, Washington, he was the Communications Officer and made two deployments to Antarctica and one to the Arctic.