Home / Academics / The Office of Scholarship, Research, and Innovation / Center for Arctic Study and Policy / James B. Ellis II 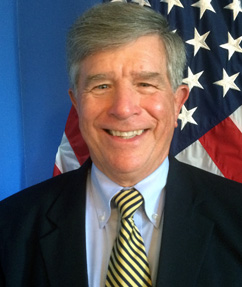 Retired. Active in the affairs of the Coast Guard Academy Alumni Association and serve on the Board of Directors.

Partner in the law firm of Blank Rome LLP, a 500-attorney, multi-national, multi-city law firm that primarily represents U.S. and foreign businesses on a wide range of legal issues. During this period, served for six years on the firm’s executive committee and distribution committee and served for the past four years as the administrative partner for the Washington, D.C. office. Primary area of practice is representing maritime companies in corporate transactions and financings.

Founding Partner of the Washington, D.C. law firm of Dyer Ellis and Joseph. Served as managing partner for 15 years during which time the firm grew from five attorneys to 45 attorneys. The firm specialized in representing U.S. and foreign companies, primarily in the maritime industry. In 2003, the firm merged with Blank Rome LLP.

Partner in the Washington, D.C. law firm of Kurrus and Dyer PC, a boutique law firm representing companies in the U.S. and international maritime industry.

Served as the District Legal Officer for the 17th Coast Guard District in Alaska. Drafted the regulations governing the vessel traffic system for tankers transporting oil from the Trans-Alaska Pipeline, participated in the implementation and enforcement of the 200-mile fisheries limit in Alaskan waters, and oversaw the transfer of several million of acres of property along the coast of Alaska from the Coast Guard to Alaskan natives under the Alaska Native Claims Settlement Act. Deep selected for the rank of Commander. Awarded the Coast Guard Commendation Medal.

Served as staff attorney in the Maritime and International Law Division of the Coast Guard Chief Counsel. Legal representative on the U.S. IMO delegation to the 1974 Safety of Life at Sea Conference. Awarded Coast Guard Achievement Medal. Deep selected for rank of Lieutenant Commander.

Served as Commanding Officer of the USCGC Cape Morgan in Charleston, South Carolina.

Served as duty officer aboard of the USCGC McCulloch with collateral duties as Communications Officer and Navigation Officer.