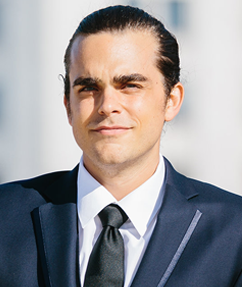 Tyler Ashner has long known that he wanted to be an engineer. Passionate about the outdoors and environmental issues, he also “just kind of like to build things.” Tyler felt that becoming a civil engineer would give him the best opportunity to incorporate those passions into his work.

On his start in the Coast Guard

“I spent my first tour as an Engineer in Training (EIT) on CGC Dallas, a decommissioned 378’. For my first year onboard I served as the Division Officer for the Auxiliary Machinery Division. My second year was spent as the Damage Control Assistant and the Repair Division Officer. After attending graduate school, I spent my follow-up tour as an Asset Line Manager at CEU Miami.”

On his current career position

“I am a licensed Professional Engineer in the Engineering Services Department of Transtar, LLC, which is a subsidiary of United States Steel and operates the railroads at all of their steel mills. It’s a great job to have as a civil engineer because I get daily exposure to both design and analysis. My company’s roots pre-dates 1900 in Pittsburgh, Pennsylvania where, for a time, our railroads distributed about 2/3 of the iron ore, coal, coke, and steel that was produced in the entire United States. Much of the original infrastructure from the turn of the century is still in operation so I get to see some really interesting designs that no longer exist in most of the country, which also presents unique challenges. Currently, I co-manage our structural inspections program, which includes 75 steel and concrete bridges and arches, and I’m currently managing several multi-million dollar projects including a public-private partnership project with the Pennsylvania Department of Transportation.”

On the advantage of graduate school

“I highly encourage graduate school as an option for Coast Guard engineers and specifically civil engineers. It’s an opportunity to zero in on a specific field within your discipline and study what most interests you. Many students will be like you in that they’ve worked for some time prior to graduate school. There is a lot to be gained from working with a diverse group of engineers that have networks and field experience in the civilian sector.”