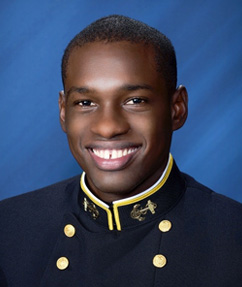 I was enrolled in Guyana Defence Force’s Standard Officers’ Course #51 when I got a call about an offer to study at the United States Coast Guard Academy. I was 16 months into the 24-month course at this time and excited to hear about the opportunity because I had always dreamed of studying abroad. As soon as I completed the last 8 months of the course, I was Academy-bound.

Deciding on a major at the Academy was not easy for me. My dream as a kid was to become an aviator, but my initial gut feeling was to try something that would be niche in my country. I saw I could continue to build upon the knowledge I already created a base for in all my advanced and college level studies prior, which was largely focused on mathematics and physics. I chose Electrical Engineering as my intended major. Due to my insatiable appetite for school, I decided that I did not want that much free time in my schedule and inquired on pursuing a double major–Electrical Engineering and Cyber Systems; I was advised that it was achievable, but of course, extremely challenging, so I said to myself, “Bring it on!” After the completion of my third semester as a double major, I am convinced that I made the correct decision and I have gotten to build upon my prior knowledge of electrical engineering, while introducing myself to cyber systems, which is a comparatively niche area of knowledge in Guyana.

After graduation, I see myself as a young officer at the Headquarters of the Guyana Defence Force, working in the Cyber and Intelligence Departments. I am excited to see what opportunities I have created for myself by pursuing a double major and observing the training at the CGA.

My advice to international students who are thinking about joining the Academy is to follow their hearts, dreams, and passions. Being a student is challenging, being in the military is also challenging, and being a student that must manage both academic and military obligations compounds everything. But that is exactly what being in the military is about. As military officers in charge of troops, you will have to make wise decisions and lead people through different situations. The versatility in which you obtain by studying at a military academy sets you up perfectly to become a strong and courageous leader, the kind of leader that a team can rally around.