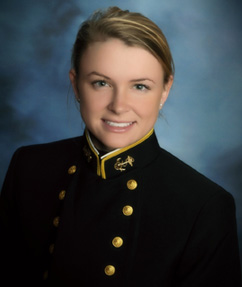 Caroline Jenkins is studying Government at the Academy, as the major aligns well with her academic and career interests. She decided on the Security Studies track within the major, because she is particularly interested in the intelligence aspects of government.

On one subject from many angles

“I enjoy how my government classes overlap and supplement one another. All in one day I might learn about the government in North Korea during Comparative Politics, the United States’ security strategy towards North Korea during National Security Policy, and how to observe trends of North Korean corruption in Social Science Research methods. It provides an interesting “every angle” approach.”

On the experienced faculty

“I am always impressed by the real, hands-on experience each of my instructors has had in their respective field. Some of my instructors have travelled to many countries around the world, conducted their own research projects, or worked in the intelligence fields for much of their career. I am learning from not only theory, but also experience.”

On a diverse classroom

“I have been surprised by all the different backgrounds from which the students in the major have come. It makes class very interesting and eye-opening to see so many different perspectives and makes me optimistic about the Coast Guard’s future leadership.”

On the benefits of the major

“Graduating as a Government major allows you to be a lawyer, a politician, an intelligence officer, an ambassador, and more! While some majors limit the fields you can go into in the future, this major opens doors to many different paths so you can be flexible during your career in the Coast Guard, or outside of it.”