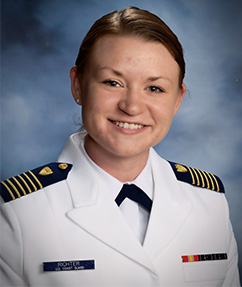 In junior high school Dakota Richter set her heart on attending a federal service academy. She wanted to both serve her country and be mentally and physically challenged throughout her college years. Ultimately, it was tales from alumni and the Coast Guard’s mission that steered her to Academy.

On choosing her major

“My first year at the Academy I heard a lot about the Naval Architecture & Marine Engineering major – namely that it was ridiculously challenging but equally rewarding, both as a cadet and as a Coast Guard officer. Both the challenge and the reward appealed to me.”

“The best skills that I have gained from being a NA&ME major are critical thinking, time management and learning when to ask for help. Balancing the NA&ME academic workload with club activities and military obligations is difficult, so finding the balance between figuring things out on your own and asking for advice from others is so useful.”

“Hands down, the NA&ME faculty are the greatest collective on campus. I have received so much help from my instructors in the past three years on subjects that extend far beyond homework assignments. Whether it’s to borrow a calculator or sort out mid-cadet-career crises, their doors are always open.”

“As 2/c ‘Nav Arch’ students we have two hands-on projects: the ‘Great Boat Race’ and the ‘Sinking Barge.’ Both involve teams of cadets working in the Power Lab to create the fastest and sturdiest vessels imaginable. Both the successes and heartbreaks of these two projects lead to a greater appreciation for the material we learn in the major.”