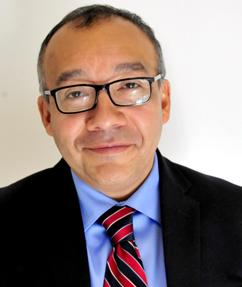 A national award-winning educator and Fulbright Scholar, Jose B. Gonzalez, Ph.D., was born in San Salvador, El Salvador and immigrated to New London, Connecticut at the age of eight. He is the author of the poetry collection, Toys Made of Rock, based on his personal voyage from a non-English speaker to a Professor of English. He has been a featured speaker at colleges, universities, and organizations throughout the country and has contributed critical and nonfiction essays to such journals as New England Quarterly and to National Public Radio. His work has been included in such journals as Callaloo, The Teacher’s Voice, Palabra, Acentos Review, and Colere, and anthologies including Theatre Under My Skin: Contemporary Salvadoran Poetry, Coloring Book, Nantucket: A Collection, and Latino Boom: An Anthology of U.S. Latino Literature, which he also co-edited with John S. Christie. He has presented his poetry at such places as the Smithsonian National Museum of African Art, the Smithsonian National Museum of the American Indian, and international literary festivals. He has received national and regional awards for his teaching, his efforts to improve the conditions of Latinos pursuing a college degree or a career in higher education, and for his poetry. He has served in multiple administrative and leadership roles, and is also the founder and editor of LatinoStories.com.