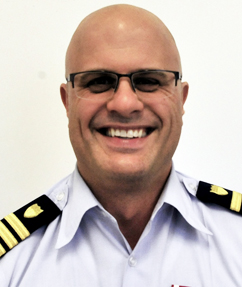 After graduating from the U.S. Coast Guard Academy in 1998 with a degree in Electrical Engineering, Tom DeNucci was assigned to the office responsible for overseeing the construction, outfitting and delivery of the Coast Guard Cutter Healy, the nation’s largest and most technologically advanced icebreaker.

The assignment provided him with the opportunity to become involved in the final stages of ship design and construction. A year later, Dr. DeNucci reported aboard Healy as a plank-owner and served as the Damage Control Assistant and the Electrical Officer.

Now retired from the Coast Guard after a 20+ year career, Dr. DeNucci serves as an instructor in the Naval Architecture and Marine Engineering (NAME) program. The cadets that he and his colleagues teach focus on the design and analysis of ships and boats, and the systems that help them operate. Graduates of the program contribute to the solution of engineering challenges such as the construction, safe operation, sustainment, management, and repair of one of the Coast Guard’s main assets – its fleet of more than 240 large vessels, called cutters.

Dr. DeNucci and his colleagues in the NAME team are looking for those students who might follow in his footsteps and do a deep dive into the next generation of cutters now being commissioned into service that Academy graduates will be serving on for years to come.